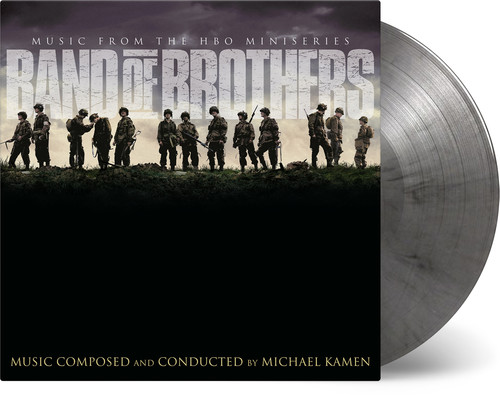 Band of Brothers is a 2001 American war drama miniseries based on historian Stephen E. Ambrose's 1993 non-fiction book of the same name. The music for the series was written and composed by Michael Kamen, who worked with Pink Floyd for their 1982 movie The Wall and conducted The San Francisco Symphony Orchestra for Metallica's S&M. Michael Kamen also composed scores for Highlander, Lethal Weapon, Die Hard, License To Kill, Last Action Hero, Robin Hood: Prince of Thieves, and many more. Sadly he passed away in 2003.Band of Brothers is a dramatized account of 'Easy Company' (part of the 2nd Battalion, 506th Parachute Infantry Regiment), assigned to the United States Army's 101st Airborne Division during World War II. Over the course of ten episodes, the series details the company's exploits during the war. It was the most expensive television miniseries made by HBO or any other television network when it was created in 2001. The executive producers were Steven Spielberg and Tom Hanks, who had collaborated on the 1998 World War II film Saving Private Ryan. The series won Emmy and Golden Globe Awards in 2001 for best miniseries.This is an exclusive limited edition of 750 numbered copies on silver and black marbled vinyl to commemorate the 75th anniversary of D-Day (June 6). The package includes a poster and insert.
back to top